The Aviation cocktail, a high-flying classic recipe – simple to prepare with complex flavours and an incredible glamour.
Created by Hugo Ensslin, head bartender at the Hotel Wallick in New York in the early 20th century, it was refined in the 1930s by Harry Craddock, head bartender of the Savoy (paid link).
This classic gin cocktail has stood the test of time. Try it out and let us know what you think… 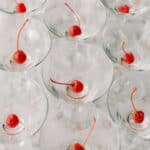 Challenge: these are delicious. See if you can stop at one… or you can try a different cocktail, check our other recipes here.

Gin has been around in different forms for a long time – but how much do you know of the history of your favourite drink?
How did gin change the world? Do you know which famous people liked a good G&T? And why did cats dispense gin to Londoners in the 18th century? Or,  why was gin known as “mother’s ruin”?
All will be revealed in our regular Gin-triguing facts segment – updated every month with quirky and totally irrelevant Gin-formation that you can impress your friends with.

When Captain Dudley Bradstreet wanted to avoid paying excessive taxes on his gin sales in 18th century London, he came up with a cunning plan. He nailed a wooden sign to his door in the shape of a cat with a little pipe hidden inside its paw. When customers put a coin inside the cat’s mouth, Captain Dudley would return the favour by pouring gin down the pipe directly into their outstretched cup. This became known as Old Tom gin after the Tomcat sign from whence it came.
Old Tom style gin is now back in fashion with its sweeter taste making it perfect for light and refreshing cocktails – so much so that the Dorchester Hotel in London recently commissioned its own unique Old Tom Gin especially for its signature cocktails including its most recent creation, a delicious Coriander and Lemongrass concoction whipped up by head bartender Giuliano Morandin.

Hand made in small batches in the beautiful Surrey Hills, south of London, Silent Pool Gin (paid link) is not only one of the tastiest gins we’ve tried recently, but it comes in one of the prettiest bottles we’ve ever seen.
It even has a 600 year old legend attached.

Named after a local beauty spot near Guildford known as the Silent Pool, legend has it that some time in the 14th century, wicked King John of England was passing by the pool on his horse when he spotted the local woodcutter’s daughter, the most beautiful woman he had ever seen, bathing in the crystal clear water.

He wanted his wicked way with her and she refused to yield her honour to the evil monarch and waded backwards into the water to escape him, when she stumbled and drowned.

Even now, her ghost is said to be seen at midnight in the reflections of the dark water of The Silent Pool.

And now for the legendary gin itself – the bottle is stunning, with an unusual glass stopper and a beautifully intricate design of autumn colours set against an aqua tinted bottle reminiscent of the pool itself.

The bottle features scenes illustrating the legend (including tiny figures of the King and the Maiden hidden among the leaves).

The gin is made on site by Master Distiller Cory Mason who uses a copper pot still heated by steam from local wood, burned in its wood fired burner.

The result is a delicious full-bodied, fresh gin full of complex flavours derived from its blend of 24 specially chosen botanicals including local lavender and honey. These well chosen ingredients enliven the senses and play tricks on the mind, but the result is a taste sensation that is sure to get people talking. Its dominant botanicals include locally sourced chamomile, kaffir lime, elderflower, coriander, lavender, orange and pear (amongst others).

It tastes of the English countryside and is fed from the same spring that feeds the legendary pool itself. Mix it with a decent tonic water such as Fever Tree (paid link) and garnish it with a thin orange wheel or a wedge of lime (to bring out the citrus notes). You could even add a mint sprig (or two) to give it a fresh twist and wait for the honey and lavender to come through on your tongue. You’ll love it.

Other products available (including seasonal gins)