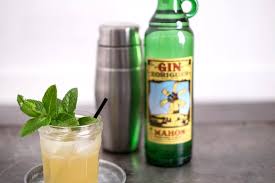 Most gin lovers have already heard of Gin Mare (paid link) – probably the best known of the Spanish brands. But Spain, having changed the way the world thinks of gin, is now starting to discover a range of new gin brands to add to its traditional gin distilleries. This new attention is also helping to revive the fortunes of some older Spanish gin brands that have been around for a long time.
One of these is Gin Xoriguer, made by Destilerias Xoriguer on the tiny and beautiful island of Menorca, set like a glittering jewel in the beautiful Balearics – it’s the perfect setting for a gin and tonic.

Not something you would always connect, but there is a reason why this little distillery exists.
In the mid-18th century, Menorca was briefly under Dutch and British rule and the locals were encouraged to make gin to keep the naval forces happy. At one stage, there were 5 distilleries on the island, producing a diverse range of gins, but now there’s just one.
In 1910, master distiller Miguel Gusto established a little distillery on the harbour front of Mahon and the Xoriguer distillery is still making 60,000 litres of Mahon gin every year along with a couple of budget gins and almost a dozen local island liqueurs.

This local gin doesn’t get much airplay outside of the island and is heavily juniper dominant. In fact, that’s the only botanical they use in their domestic version. The berries, hand picked from the Pyrenees, are stored in hampers for a couple of years to concentrate the oils before being macerated and added to the neutral grape based spirit.

While the ingredients and the process are simple and the product perhaps lacks some of the complexity of a Monkey 47 or a Silent Pool, it packs a big juniper punch with a hint of pine sap and a soft, oily palate. Peppery and with a hint of tobacco, it’s a great drink to sip on while watching the sun set over the Mediterranean, nibbling on local cheese and sucking on plump, juicy giant olives.

Drink it with tonic, by all means.

But to drink it like a local, have a “Pomada”, traditionally made by mixing the gin with freshly squeezed local lemon juice. And at only 38% ABV, you can afford to have a couple of them!