There are some gins that tick all the boxes on paper, but when it comes down to the perfect serve, it can be hard to know how to get the best from your gin.
Last week, we took a look at barrel-aged gins.  We focused on the history and process of making these delicious gins. So this week, we’re looping back to share some perfect cocktail blends that are bound to get the best out of your barrel-aged gins.

Roll out the barrel

The Scots got the ball rolling by ageing their gins in leftover whiskey barrels.  There are plenty of those lying around Scotland. Then America took up the baton, ageing gins in old bourbon and rye whisky casks. But anywhere there are innovative distillers, there are bound to be barrel-aged gins somewhere nearby.  Last week, we suggested 5 barrel-aged gins that are worth adding to your wish list. But what’s the best way to drink these beauties, if sipping neat gin isn’t your thing?

Well, we thought we’d help by suggesting a few delicious barrel-aged gin cocktails that will help you to get the very best out of your gin. Barrel-aged gin combines the subtle botanicals of gin with the smooth smokiness of a whisky, which all sounds great on paper, but how are you supposed to drink it?
In the last decade or so, these hybrid gins are slowly and steadily building a reputation. But they’re not for everyone.

One of the early pioneers was the French gin company Citadelle, who launched their Reserve gin way back in 2008. Since then, many other players have followed in their footsteps, with up to 100 varieties available in the market as we speak.
Some of them are scooping up big awards and they’ve become quite a talking point in the industry. But the public are confused. Some people are fooled by the light gold colour and expect it to taste like whiskey (which is understandable). Others assume it must be an Old Tom gin. But in reality, barrel-aged gins are not a new thing. In fact, Genever (the world’s original gin) was made and transported in a barrel of malt liquor to give it a unique characteristic.

These days, it’s all about experimentation, with distilleries trialing new varieties of wood, new barrels and new techniques to get the very best out of the gin. And some of the snobbery of only drinking barrel-aged gins “on the rocks” is also disappearing as drinkers increasingly understand the infinite variety and complexity that these gins possess. Some people claim that their gins are a perfect substitute for cocktails that would normally require a bourbon or whisky base, such as an Old Fashioned (particularly useful in the summer months when you want something a bit lighter or more refreshing). Others prefer lighter gins to add depth to the more subtle flavours of a Bee’s Knees or an Aviation.

Stronger flavoured barrel gins also work particularly well as a substitute for rum. Think rum cocktails, Mai Tai’s and even traditional rum drinks such as a Dark and Stormy. The depth of flavour of barrel-aged gins works well with the spicy and ginger notes that favour rum and it can be a real delight to drink. But these gins are made for drinking neat or adding complexity to cocktails. They don’t work so well in a standard G&T. So, after last week’s suggestions of some great barrel-aged gins to get into your collection, here are some great cocktail recipes to help you mix things up a little.

Over a barrel (cask-aged gin cocktail)

No smoke without fire?

Smoky ice cubes are indeed a thing. And they’re so easy to make. You could go all out and spend a day preparing a fire, smoking the wood and delicately infusing the ice. Or, you could simply buy a small bottle of liquid smoke and add a few drops to your ice cubes.  Bingo!

This little hack is a gift from us to you – we know you’re busy and who has the time to do this from scratch?  As the ice cubes inevitably melt, your drink becomes infused with a gentle smokiness that can enhance strong, complex cocktails such as a Negroni or a gin Old Fashioned. It’s a little magic trick that will impress your friends. For more inspiration, check out our free Top 10 gin bartending hacks.

Here is a great recipe that will draw out the smoky  flavour from the ice to really lift your cocktail out of the ordinary. 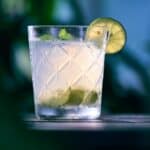