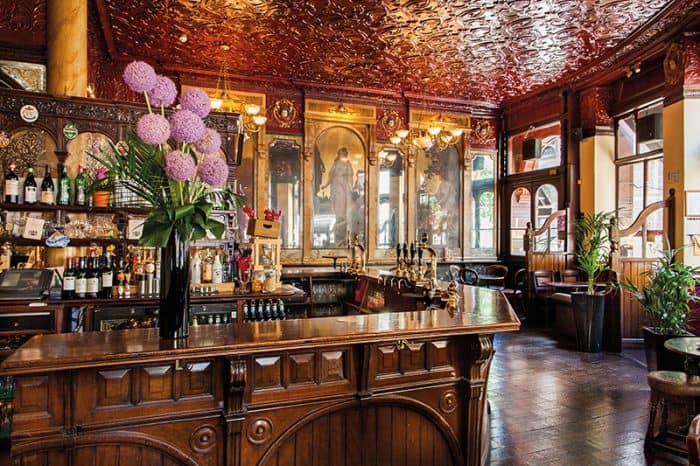 There aren’t many real gin palaces left in the UK these days – and that’s a pity.

When I think of a gin palace, I imagine an ornate room with high ceilings, glamorous chandeliers and “over the top” decorations. I picture long polished bars, marble tiling and oil paintings and engravings on the walls. A sense of glamour and opulence. But it was not always that way.

In the 18th century, gin began its journey in Britain. In those days, it was sold directly to customers from what were known as “dram shops”. These were often pharmacies (since that was where much gin was made in those days). They generally sold the gin to drink as a shot to drink right there or to takeaway. Dram shops were not places to linger and soak up the atmosphere. But there was no alternative and as the price of gin plummeted, their popularity soared.

By the 1750s, more than 7,000 dram shops were operating in London alone, distilling up to 10 million gallons of gin per year – mostly Old Tom. In fact, in those days, the average Londoner drank around a half a pint of gin per day. Social issues increased dramatically and violence and prostitution soared.

Then, as Britain changed its licensing laws, it also changed the approach to drinking gin.

So, to control consumption, the Government imposed taxes on gin and by the late 1700s, gin consumption had massively decreased. The backstreet gin shops died out, only to pave the way for the birth of a new phenomenon – the gin palace. Distillers started making their gin in quantities. They took their inspiration from the glamorous new department stores that were starting to appear in major cities, looking for new ways to engage with their customers.

In fact, between 1825 and 1826, gin consumption doubled from 3.7 million barrels p.a. to 7.4 million gallons p.a. The distillers saw an opportunity to capitalise on this growth in demand and began to build the first of the gin palaces. Based on the glamorous merchandising style of the new retailers, they spared no expense in fitting out these new, upmarket drinking establishments.

Adding a touch of glamour

High ceilings and ornate mirrors dominated these glorious spaces – and for the first time, customers were encouraged to sit down and enjoy their gin in these extravagant new surroundings.

Gin was poured directly into glasses from giant barrels on the walls and pretty barmaids sold it to customers over the “bar”, which was simply an evolution of the chemist shop counter where gin was originally sold.

This style became hugely popular and paved the way for the even more glamorous gin palaces and pubs of the Victorian era. Sadly, none of the original gin palaces remain, but a few glamorous and ornate Victorian pubs still exist to give you a sense of the style and opulence that they once embodied.

If you ever find yourself in London, here are a few nice places where you can spend the afternoon sipping a G&T, staring at the ornate ceiling: