It’s that time of year again. Every spring, we are teased with fleeting glimpses of bright sunshine and clear blue skies. We are seduced by the promise of warmer air and longer evenings.  And then, we return to the cooler weather and grey skies for a few days, feeling a little cheated and let down.  It’s what’s called a false spring – and it can be a little frustrating.  But the good news is that the direction of travel inevitably takes us towards summer.  And we’re so looking forward to enjoying it with more freedom than we had in 2021.  After a year of restrictions and confinement, I suspect there will be a lot of celebrating once normal life has returned.

For more than a year now, we have been restricted to drinking at home and raising a glass to our friends and loved ones via Skype or Zoom.  That’s all been very nice but what we’ve all really wanted is to laugh and smile in the company of those we love.  Every moment shared is now more precious than ever.  But, of course lockdown ending has other consequences.  And we don’t know exactly if or when restrictions will return.  We do know some things for sure. Statistics tell us that people have been drinking more during this lockdown.  Not really surprising, given the circumstances.  We will also have to get used to pub measures once again.

Have you had your shot?

While we have been pouring gin into our glasses more regularly over the last year, we’ve also been quite generous with our shots.  Anecdotally, it appears that while the number of gins we drink is one thing, how much booze goes into those drinks has changed dramatically.  A single measure of gin?  Forget it.  A double? We’re getting there. A free-poured treble – now that’s more like it!
Sadly, as the world opens up, we’re going to have to get used to bar-made drinks again with their controlled measures and strict recipes.  Nowhere near as much fun as a free-poured cocktail.

While we are in no way condoning excessive drinking, we appreciate the free-pour method more than ever and are likely to embrace it more as we get used to paying bar prices for weaker drinks than we get at home.  So, we thought we’d suggest a little cocktail that allows you to take back control.  This gorgeous, light, spring elderflower drink is the perfect refreshing cocktail to toast those blue skies and little fluffy clouds that herald this time of year.  Refreshing, natural, light and delicious, this spring cocktail is going to put you in a positive, optimistic mood for the sunshine that surely lies ahead.  Plus, it’s also really easy to make – and even easier to drink.  This is a perfect cocktail for spring, but we think once you’ve tried it, you’ll be sipping on these well into the summer.

The Elderflower Collins – a taste of spring

Introducing the Elderflower Collins – best served in a tall Collins glass, with lots of ice and a refreshing slice of lemon. This lovely cocktail only uses a few ingredients and is really simple to make.  Basically, all you need is gin, lemon and elderflower cordial (and a slice of lemon for some citrus zest!)  We think this cocktail lends itself to the clean, vapour-infused taste of Bombay Sapphire – a gin that doesn’t overpower the elderflower.  Martin Miller’s is another deliciously smooth option that is a perfect, smooth match for elderflower.  And while the recioe might call for 50 ml of gin, freedom means you can keep pouring until you’re happy. All you need now is a hammock and some nibbles! 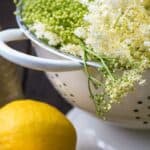 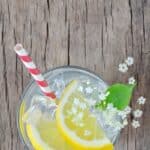 Spring is in the air (almost…)

Sometimes, a cocktail comes along that quickly becomes an instant classic.  The Bramble is one such drink.  At some point in the early 1980s, legendary bartender, Dick Bradsell was working in a bohemian cocktail bar, deep in the heart of London’s Soho. This was back in the days when cocktails were still a guilty secret in a city that got its kicks from beer, wine and whisky.

The bar was called Fred’s Club and it served its slightly dangerous concoctions to an eclectic Soho mix of artists, writers, musicians, drag queen’s and the occasional confused tourist.  That was when Fred said: “Right. Let’s create a British cocktail we can be proud of”.  Dick decided to rise to the challenge and his mind wandered back to his childhood, where he had his happiest memories.  He remembered his early years wandering the beautiful fields, winding lanes and gentle hills of the picture perfect Isle of Wight.

For those of you who don’t know, the Isle of Wight is a beautiful little island. It’s nestled just a few miles off the South Coast of England.  This special place is like England in miniature.  It’s surrounded by the sheltered waters of The Solent on one side and the exposed Southern Coast gazing wistfully towards Northern France on the other side.  The island is only 22 miles long and is filled with impossibly cute villages, thatched cottages and beautiful beaches.  Perfect for those long country walks.  The fields and lanes are lined with beautiful vibrant hedgerows bursting with flowers, berries and fruit and teaming with birds, bees and a wide diversity of local wildlife.

As a  child, Dick wandered these lanes, picking wild fruits and berries under an English sun.  Those perfect days must have made quite an impression on the young Dick.  And this is where the Bramble cocktail first started to take root in the childhood imagination of this soon to be legendary cocktail king. Years later, when the burgeoning bartender was asked to create a new British cocktail for Fred’s Club, this is where he turned for his inspiration.

The Bramble is born

He knew he wanted to make a spring cocktail, so he combined the distinctly British taste of gin (we recommend Martin Miller’s) with the citrus freshness of lemon.  And then he added his secret weapon – Creme de Mure.  He finished it all off with some simple syrup and when he gave it a stir, this heady, fruity mixture immediately took him back to those childhood walks.  He knew he had cracked it and he called this drink The Bramble (the name given to the local name for  blackberry bush).  Dick went on to greater things and throughout his career, he has invented other world famous cocktails including the ubiquitous Espresso Martini. But this is the drink that made his name.

Well, spring is in the air, so whether you’re already basking in the early sunshine of Barcelona or dreaming of brighter days from the cozy comfort of a UK winter, this drink should be coming your way soon.  Basically, all you need is a few simple ingredients.  Pour your gin into a separate mixing glass.  Add the fresh lemon juice and simple syrup and shake the mixture over ice.  Strain the resulting liquid into a highball glass full of ice. Then, slowly drizzle the creme de mure through the liquid to give the drink a beautiful, marbled effect.  And if you’re all out of creme de mure, then creme de cassis is a perfectly good alternative.

The joys of spring

So, that’s it.  Welcome to The Bramble.

All you have to do now is sit back, give it a gentle stir and sip. If that doesn’t fill you with the joys of spring, nothing will.

You can check other amazing cocktail recipes here.