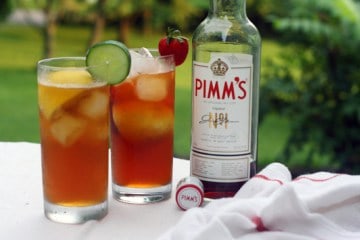 There’s nothing more delicious on an English summer day than a long, refreshing jug of Pimm’s, served with lemonade, ice, mint, cucumber, sliced oranges and lemons and poured over a pile of ice cubes.

It is the drink of Wimbledon and Ascot, Henley Regatta and the Chelsea Flower Show – but it’s at its best in your back garden on a (rare) English summer’s day. So why is it so hard to find in the land of Sangria and Tinto de Verano?  Well maybe that’s just it – there are so many established alternatives in Spain, so why should they bother with an English version of what they already do well?

I’ll tell you why – because its got gin in it and it’s absolutely delicious.

So what is it and how did it come about?

The original Pimms was invented in 1840 by James Pimm of London town. He was a restaurant owner with several establishments across the city and experimented by blending gin with liqueurs, spices and other special ingredients, which he then served in pint tankards. It proved so popular with his customers, that he saw an opportunity and he took it. He started bottling his concoction and his customers loved it. That began a great British love affair with this delicious, easy to drink gin-based spirit.

Shortly after the bottling started, so di the journey of Pimms itself. One of its first ever shipments was to the Galle Face hotel (I was there earlier this year and I can vouch for the fact that there can be no finer place in the world to sip it than on the verandah of this classic colonial, eating a fine curry and gazing out at the Indian Ocean). In 1898, a shipment of Pimms was sent up the Nile by boat to Sudan. Its mission: to help to quench the thirst of the forces who were digging in to defend Khartoum. I can only imagine General Gordon having a last glass of Pimms before his last stand at the Battle of Omdurman guaranteed his place in the history books forever.

Since then, Pimms has gone from strength to strength and a number of different Pimms Cups are now available including Pimms No. 2 (based on scotch); Pimms No. 3 (based on rum); Pimms No. 4 (based on rye whiskey); and Pimms No. 5 (based on vodka). But the Daddy of them all is still Pimms No.1 and it stll tastes of Summer.

Hard to find in Barcelona, but availabe at Colmado Quilez