The Singapore Sling classic cocktail was invented in Singapore’s Raffles Hotel where it started off as a Straits Sling.

However, this appeared a little too dry for the contemporary taste buds. So, the head bartender decided to sweeten it up a bit. He replaced Kirsch with cherry brandy and lengthened the drink to make it more refreshing.

The result:  one of the most famous gin-based cocktails in the world, ready to refresh your taste-buds on a hot day and transport you to a fan-cooled veranda on a hot and humid Singapore day. Aaaah! I can taste it now…

Build the first 4 ingredients in a tall ice-filled glass, then stir, top up with soda water and add the bitters.

For a spicy twist on the classic recipe, replace soda water with ginger beer or ginger ale, sit back and pretend you’re in Singapore.

The Singapore Sling was originally simply called the Gin Sling, but as its fame developed local ingredients such as Sarawak pineapple juice were added.

Sometime around 1930, it took its current name and the recipe was the listed in the Savoy Cocktail book (paid link) based on the memories of the bartenders at the Long Bar at Raffles Hotel. Over the years, it has had many incarnations with many variations.

The most well known is the Singapore Sling but variations are plentiful and include the Gin Sling and the Straits Sling, a punch version that can serve up to six people. Whatever your preferred mix, this is a cocktail redolent of classic colonial Singapore. Mix one up and let us know what you think…

Following our colonial theme, try out the Cotton House Hotel roof terrace for a classic colonial vibe, sipping a nice G&T looking up at the rooftops of Barcelona.

We went there on a recent early Summer evening and swept up the grand staircase towards the lift, which whisked us up to their classic roof terrace where we ordered a round of classic and unusual gins and soaked up the atmosphere…

Despite a slow start to service, the terrace itself is a hidden treasure, full of colonial ambiance with cane chairs and hanging flowers. We went in for dinner (the most amazing pop up Indian restaurant by Atul Kulchar) before returning after dinner to try another round of G&Ts chosen from their reasonable selection of gins. 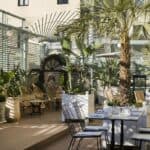 Verdict: the Cotton House Hotel roof terrace has lovely atmosphere and ambiance in a stunning hotel. Only let down by confused and disorganised service and very expensive drinks (although I guess that should be expected at a 5 star hotel on one of the main streets in Barcelona).
We would return, for the atmosphere, not for the service.